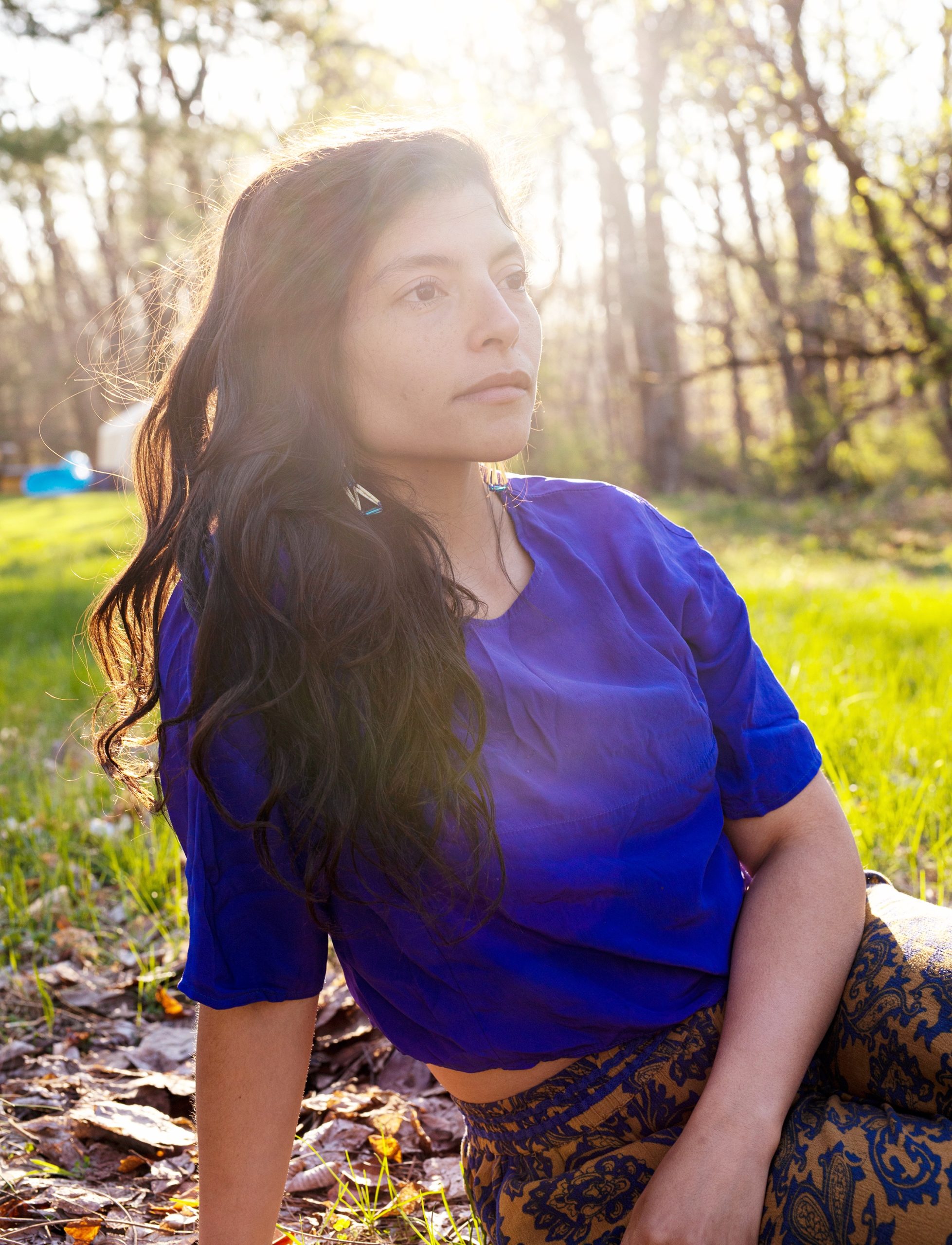 My art is rooted in the land that shaped me, and the stories it continuously tells.

I claim the body as a space for narratives that defy categorization, that grow in the peripheries. I seek the animistic territories stored in the underground layers of the skin, while also building a social practice that centers storytelling and story keeping.

I see the body as a vessel for the most primal creative force, and I know the necessity to dream inter-species and co-create with the earth.

I am interested in the performative maps that the body stores, specifically in connection to ancestral technologies, ecology, sound and resilience, which I explore through a variety of mediums such as photography, performance, ceramics and sound objects.

When I contemplate the earth, I travel to the past and future simultaneously, and this act of contemplation, ignites the spirit.

I seek to understand my own heritage and the sonic and oral traditions that have populated the Americas for millennia; I think in compositions; what needs to be composed in order to develop a language that connects memory and the universe, the human and the cell. With this in mind and grounded in indigenous ontologies, my ancestral homelands and my ongoing investigation on ritual and sound. I explore pre-Columbian sonic instruments as a way to repair, reclaim and reimagine temporalities that can provoke healing, tell stories across time/space and honor the land.

In my current research/practice I reconstruct pre-Columbian instruments, performing them, teaching how to make them, and create large sonic sculptures with faunae iconographies from my own ecological heritage. I use a form of Quip nayra, an aymaran concept of circular thinking, as my methodology, where past and future are conjugated in a simultaneous dimension of time/space/being that is in constant communication and connection with the present.

I imagine how ancestral sound and ritual can ultimately help us engage with intersectional technologies that have the potential to interrupt imperialism and ecological degradation in order to tend to the earth and heal mutually.

We must remember everything, especially those things we never knew.

+ In the tradition my name is Koyoltzintli, The One Who Walks Among Rattles, this name was given to me almost two decades ago when I began to apprentice in ceremonial healing and plant medicine. The passing of my most cherished teacher, friend, elder, comrade inspired me to bring this name forth as I walk with her as one now. +

Koyoltzintli Miranda-Rivadeneira, is an interdisciplinary artist, a visionary, and educator living in New York. She grew up on the coast of Ecuador and the Andes, geographies that permeate in her work. She focuses on geopoetics, ancestral technologies, ritual and storytelling through collaborative processes and personal narratives. Intersectional theories, and earth-based healing informs her practice. Nominated for Prix Pictet in 2019, her work has been exhibited in the National Portrait Gallery in Washington, DC, the United Nations, Aperture Foundation in NYC, and Paris Photo, among others. She has been an artist in residence in the US, France, and Italy and has taught at CalArts, SVA, ICP, and CUNY. Rivadeneira has received multiple awards and fellowships including the Photographic Fellowship at the Musée du Quai Branly in Paris, NYFA Fellowship, and the IA grant by the Queens Council of the Arts. Her first monograph Other Stories was published in 2017 by Autograph ABP, her work was featured in the Native issue of Aperture Magazine (no. 240). in 2021, her work was included in the book Latinx Photography in the United States by Elizabeth Ferrer chief curator at BRIC.

Send me an email if you want to be on my mailing list and for any other inquiries.

When [in the world] one sees nothing else,

that is [participation] in the infinite.

But when one sees, hears and recognizes only otherness:

that is smallness. the infinite is immortal, that which is small is mortal.

But Sir, that infinite, upon what is it established?

Upon its own greatness -- or rather, not upon greatness.

that is not what I mean; not that. For in that context everything is established on something else.

This infinite of which I speak is below. It is above. It is to the east, to the west, to the south and to the north.

It is in fact, this whole world.

And accordingly, with respect to the notion of ego:

I also am below, above, to the east, to the west, to the south and to the north. I, also am this whole world.